Communication – did I say that right?

An effective Communication is one of those things that should be easier than it is (although many people mistakenly think it is easy!).

Unfortunately it can be fraught with danger, misunderstanding and confusion as a result of unclear or mixed messages.

Fundamentally, we communicate for one of two reasons – to tell someone something or to get them to do something, it is about sending and receiving information.

So, whatever the underlying reason for our communication, we are needing to facilitate a change in the receivers worldview.  As a result, any communication should always be a two-way process.

Effective communication, however, only happens when the message is sent, received and (most importantly) understood!  Communication is not what you say – it is what they hear!

The meaning of the message is not necessarily what you meant rather it is the interpretation the receiver puts on the message!

We are constantly communicating; either vocally (the actual words you use as well as the tone of voice, etc.) or by our body language (e.g. how we are standing, sitting, moving, looking, etc.).  Even when saying nothing you are still communicating something.  You cannot not communicate!

According to Ted Nicholas the following elements are fundamental for communicating effectively.

Personally, I would add a sixth step –

Ted appears to have adapted the AIDA (Attention Interest Desire Action) principle and expanded on it.  This is a structured way to compose a message to elicit the appropriate response.  Here, Attention represents headline, which should capture the receiver’s attention and make them want to engage with the rest of the message.  Capturing their Interest then builds on the headline in an informative or interesting way.

Then, if you need the receiver to do something, you must move then to create a Desire, think here WIIFM (What’s In It for me?) and identify why they should respond as you want them to). Finally, you must prompt an Action, which must specify what you want them to do, how, where, when, etc. If your communication does not follow this step by step format it will not be as effective as it could be.

Harry Procter (1993) suggests a “Bowtie” model to help understand how people engage in communicating with each other in a way that causes either virtuous or vicious cycles of behaviour in their interactions with each other. 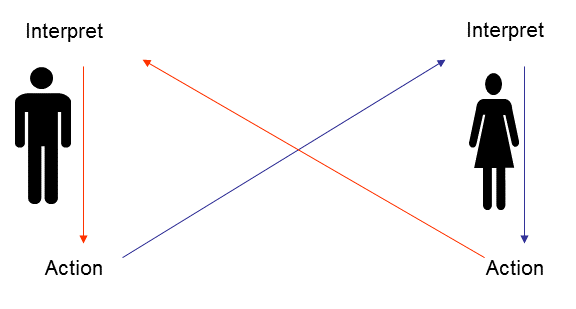 For me, one important element of this interaction is it’s sense of personal ownership and control.  It is only me who can change the cycle from a negative one to a positive (or vice versa – although why anyone would want to do that is an interesting question).

I can do this by changing what I do – I can’t expect the other person to change their opinion and/or behaviour in response to my repeated actions without me first doing something different (I’ve seen claims that Einstein’s theory of Insanity is doing what you’ve always done and expecting a different result!).

A Bowtie in action

“… the manager of the purchasing department was absolutely indignant..  He had been told nothing about the new appointment.  Not surprisingly, his relationship with the chemist was ruined from the outset …  The manager completely ignoring the [chemist] about whose appointment he had not even been consulted.

The chemist, for his part, felt his qualifications entitled him to by-pass his direct superior, and began to devise a purchasing plan of his own.  This elicited symmetrical reaction from the Purchasing manager who began to treat the chemist with even greater disdain. …. The result was a negative spiral of symmetrical interactions”

It is up to the sender of the message to check for understanding by asking clarification questions to ensure the message has been received as intended.  Be careful as a “yes” answer to “do you understand?” can be a meaningless response.  It does not give you confirmation that they have understood or even agree with the proposed course of action.  It could signify compliance rather than commitment.  You need to get them to confirm back to you their understanding.

Some of the, many, barriers are :-

These have a knock on impact on the outcome of any communication and is seen in the “impact v intent” model.  This is when the original intention is drowned out when the receiver believes there to be a negative impact.

Thomas Gordon, in his ground breaking Parent Effectiveness Training, devised a comprehensive list of what he called communication spoilers.  These include:

However, to be effective we need to use “Responsive listening” as much as possible.

NB The picture is from an excellent workshop Susan Birdi (top right) and Claudi Ghitti (top left) ran at a PCT conference in Brno in 2014.  The workshop was on using Dixit cards as a means of storytelling.

About the Author: John Fisher

Observer of life, the universe and Rugby (League) as well as Leadership development, coach, facilitator and change management. I've been lucky enough to have gone to loads of places and done a few things :-) - in the main I enjoy life

NOTE: These settings will only apply to the browser and device you are currently using.

These allow us to recognise and count the number of visitors and to see how visitors move around our website and interact with our payment interfaces when they are using them. Some of the tools we use provide us only with information about trends and aggregate user behaviour. A cloud-based application provided by FullStory, Inc., enables us to record your session on our website and watch a replay. It allows us to see where you moved your mouse, what you clicked on and how you scrolled. We use this information to understand how visitors use our website and to identify any usability problems, so that we may make improvements to the experience. We do not attempt to identify you with this information.